<![CDATA[Three Buddhist monks have been killed in a head-on car crash on the A68 in the east of Scotland on Christmas eve . The two car accident happened about ten miles south of Edinburgh and 1.5 miles (2.4 km) south of Pathhead, Midlothian, on 24 December at around 7.30am. <a href="http://www.eelamenews.com/?attachment_id=107693" rel="attachment wp-att-107693"> 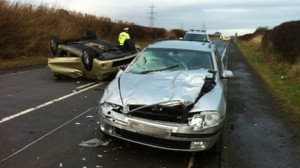 One of the cars, a gold coloured Nissan Note, was carrying five people including Buddhist monks ended up on its roof. Three male backseat passengers in the car, who were all Thai origin Buddhist monks, died at the scene. The female driver of the Nissan managed to get herself free before emergency services arrived. The male front seat passenger in the vehicle was cut out of the wreckage by fire crews. Three male passengers sitting in the back of the Nissan died at the scene, Lothian and Borders Police confirmed.]]>