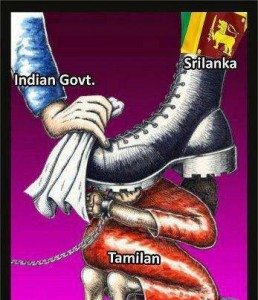 Speaking in unison, Chief Minister Jayalalithaa, key United Progressive Alliance ally Dravida Munettra Kazhagam and other parties in Tamil Nadu on Tuesday condemned the Centre’s stand on continued training of Sri Lankan military, with All India Anna Dravida Munetra Kazhagam chief castigating government for ‘insensitivity’ and the DMK accusing it of hurting Tamils. Conveying her displeasure to Prime Minister Manmohan Singh  in a strongly worded letter, Jayalalithaa recalled her last week’s plea, demanding that Sri Lankan military personnel undergoing training at Defence Services College in Wellington in the state be sent back to their country. “Instead of acceding to my request, I am surprised to learn that the government of India has openly declared that the said training will go on since Sri Lanka is a friendly country. This betrays the total insensitivity on the part of the government of India towards the views of my government as well as the sentiments of the people of Tamil Nadu,” she said. The chief minister reiterated that New Delhi should give up such a ‘condemnable attitude’ and show more consideration and regard for the sentiments of the people of the state by sending the personnel back to Sri Lanka immediately. Jayalalithaa’s arch rival DMK chief M Karunanidhi was also almost on the same page, charging the Centre with hurting the sentiments of Tamil Nadu. Tamil Nadu political leaders’ sharp reaction came a day after Minister of State for Defence Pallam Raju said the training to Sri Lankan defence forces would go on. “Sri Lanka is a friendly foreign country and training will go on. Sometimes there are objections by local governments which we have to take into consideration,” he had said. Karunanidhi said “It can be construed that the Centre is hurting the sentiments of Tamil Nadu and its people by this reply (by Raju).”]]>