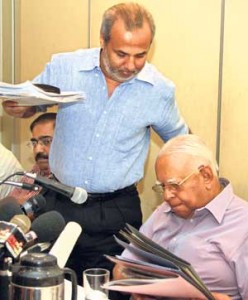 The Tamil National Alliance (TNA) met the Sri Lanka Muslim Congress (SLMC) again yesterday to obtain support to form the Sri Lankan Â government in the eastern province. TNA parliamentarian M.A Sumanthiran told the Colombo Gazette that following the discussions the SLMC had said that it will take into consideration the points made by the TNA when taking a final decision on the eastern provincial council. SLMC leader Rauf Hakeen and TNA leader R. Sampanthan headed the delegations at the talks today but Sumanthiran said that there was still no breakthrough. The government had also sought the support of the SLMC to form the administration in the eastern province. â€œThe SLMC has still not decided. They said they will take into consideration everything that was discussed today when they decide. They did not give a time frame by when they will decide,â€ Sumanthiran said. Asked if the offer to the SLMC to have the Chief Minister post if they support the TNA was made at todayâ€™s meeting, Sumanthiran said that the offer was made soon after the eastern province elections and that offer still stood.]]>