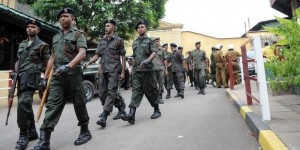 The Tamil National Alliance (TNA) has condemned what it calls as the forced recruitment of Tamils to the army in Jaffna. TNA MP Suresh Premachandran was quoted by the Uthayan newspaper as saying the army is carrying out a house to house campaign urging Tamils in Jafna to join the army. He said the accepted way of recruiting people to the army is by issuing a press notice and not through a house to house campaign. Over the weekend the army enlisted the first-ever batch of 100 Tamil girls from Kilinochchi to the Sri Lanka Army Volunteer Force during a ceremony at the 6 Sri Lanka Army Womenâ€™s Corps (6 SLAWC) Headquarters at Bharathipuram, Kilinochchi. Though the Army has a fair number of Tamils and Muslims serving the organization, this was the first time such a mass scale direct recruitment of Tamil girls ever took place, either in the regular force or in the volunteer force. More than 200 Tamil girls from Kilinochchi applied for recruitment to the Army under the project and after three rounds of interviews the army selected the best out of them for enlistment.]]>