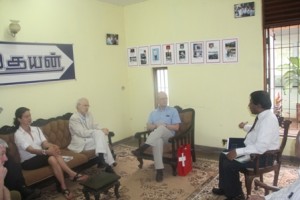 At the meeting held at the Uthayan newspaper office in Jaffna, the TNA MP alleged that the military was still heavily involved in civil administration work in the north.

He also said that the Tamils are yet to enjoy their rights following the end of the war as they have not been given a political solution.

The MP also said that several war displaced Tamils in the north have yet to be resettled on their original lands.

Meanwhile a TNA delegation also had a press briefing in Jaffna today.

Speaking at that press briefing, TNA MP Suresh Premachandran said that the army was extending its hold in Jaffna.

He said that the army was constructing new camps in the area despite earlier saying it was scaling down operations.