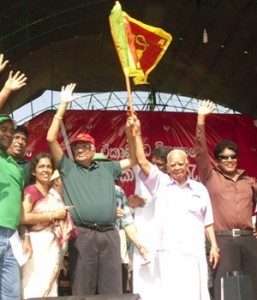 In a statement issued on Tuesday, the Tamil National Peopleâ€™s Front (TNPF) expressed â€˜severe dissatisfactionâ€™ with the comments made in Parliament by TNA leader Sampanthan. The TNPF questioned why, if the TNA did not demand complete demilitarisation in the North-East, had TNA parliamentarians participated in protests calling for withdrawal of the army and signed a statement demanding demilitarisation in New Delhi in August 2011. TNPF went on to accuse the TNA of acting falsely for the sake of winning the support of the Tamil people, and asserted that as parties forming the alliance and other TNA parliamentarians had not spoken out against Sampanthanâ€™s statements, they must be assumed to agree with them. Criticising Sampanthan for â€˜undermining the Tamil peopleâ€™s liberation struggleâ€™ by portraying to the LTTE as terrorists. The TNPF stated that Sampanthanâ€™s comments ammounted to justifications of the â€˜war on terrorâ€™ argument offered up by the Rajapakse regime. Extracts from the press release:

â€œTamils see the Sri Lankan Army, which is 99% Sinhalese, as an occupational army. Reason being, this army is the prevalent tool employed in the Sri Lankan stateâ€™s scheme to destroy the existence of the Tamil nation.â€ â€œMr Sampanthanâ€™s comments emphasising the reduction of military presence rather than demilitarisation is a sign of support for those forces that yearn to break the spirit of Tamil nationalism.â€   â€œTo the TNPF, it is irrelevant whether there are 150 soldiers or 150000 soldiers stationed. Rather than the question of how many soldiers, we are concerned more importantly by what mandate has been given to their presence in the Tamil homelands. This is our party has stuck by the justified stance that all military must withdraw from native Tamil regions.â€ â€œTodayâ€™s most urgent need is to free the Tamil people of the constant destruction they face at the hands of the Sri Lankan Army. Instead of doing that, the TNA has done something which would push [the nation] irretrievably into the clutches of the military.â€ â€œThat [the LTTE] were destroyed by their own lack of human rights and democracy are not comments spoken out of the ignorance of long-experienced politician Sampanthan. Rather they are opinions expressed to fulfil the agenda of the anti-Tamil nation forces which he depends on.â€ â€œAt a time when a UN report has caused close global scrutiny of the conduct of Sri Lanka in the war, Mr Sampanthan has created an opportunity for Rajapaksa to again escape the possibility of an international investigation, as well as seeming to attempt to destroy the Tamil peopleâ€™s few constructive opportunities in the current global atmosphere.â€ (TG)