The Tamil National Peoples Front (TNPF) led by Gajendrakumar Ponnambalam launched a bimonthly party paper named Nam Theasam (Our Nation) Sunday at the office of the TNPF in Jaffna. University Student representatives, civil society representatives, journalists, and representatives of the newspapers published in Jaffna took part in the event. “The path chosen by the TNPF is a people-oriented approach to politics, contrary to politics that centers around elections and positions,” says the lead article, quoting Mr. Gajendrakumar Ponnambalam from a recent interview. 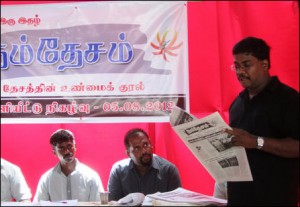 Former parliamentarian and the General Secretary of the TNPF, Mr Selvarajah Kajendren, who delivered the inaugural address at the release of the bimonthly, in his speech reminded how the mainstream Tamil papers misrepresented TNPF politicians who had differed from the TNA.

“90% of the media ignored us and our views. There were even some politically biased papers that attempted to describe us as traitors,” he said, adding that it was at that time the TNPF politicians realized the need of a paper to explain to the people the positions taken by the TNPF on matters that were crucial to Tamils.

“But, now, most of the same journalists and papers have realized the truth,” he said. “They have also identified who have become the bottleneck to realizing the aspirations of the Tamil people,” he said. It is the commitment of some journalists that has made it possible to bring out the bimonthly, he further said. 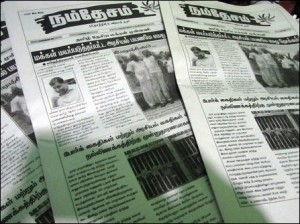 R. Thayaparan, Senior journalist who reviewed the first paper, in his address said the arrival of ‘Nam Theasam’, would be seen as a milestone event in the contemporary political theatre of Eezham Tamils.

Apart from bringing out the party position, the first issue of Nam Theasam has also managed to cover significant issues affecting the lives of the people in the NorthEast, Mr. Thayaparan said. (Tamilnet).