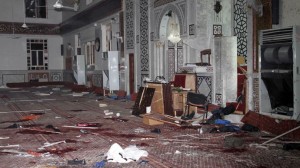 A blast ripped through a mosque in the Syrian capital, killing a prominent pro-government Sunni cleric Sheikh Mohammed Said Ramadan al-Bouti. At least 42 people have died and 84 more were wounded in the attack.

Syria’s SANA news agency reports that the scholar’s grandson was also killed in the bombing.

Sirens could be heard echoing through the capital as the scene of the blast was cordoned off by the military. TV footage revealed a chaotic scene of eviscerated bodies with severed limbs strewn across the blood-stained floor of the mosque.

RT Arabicâ€™s correspondent Kamel Saqv, who is in Damascus, said that elementary courses on Islam were being conducted at the time of the attack. Many of the dead are believed to be students, he said.

An official source told Syrian State TV that the assailant intended to blow himself up while the students were listening to prayer.

Local residents contacted by Reuters said they initially believed the explosion was caused when a mortar shell hit a nearby political office.

The British-based Syrian Observatory for Human Rights said that rebel fighters were battling with government forces in the area and that mortars had been fired.

Bouti, 83, was President of the Association of Islamic Scholars of Syria and a staunch supporter of President Bashar Assad. Bouti had once characterized the Syrian opposition as ‘scum’, and had also called on Syrians to join the military and help the government defeat the rebel fighters in the two-year-long conflict.

Syrian TV had broadcast his sermons live every week from mosques around Damascus and he also hosted his own religious TV program. His death has been viewed as a serious blow to the government, which is fighting a primarily Sunni-led insurgency.

â€œThe mainstream media will have difficultyâ€ in reporting about this attack, because this was a pro-Assad Sunni cleric, believes, RT Contributor Afshin Rattansi.

â€œHow is it that the Anglo-French-backed, or what should we call them, rebels â€“ insurgents or are they terrorists â€“ are going around killing Sunni clerics in a mosque in Damascus. Perhaps, the [mainstream media] will not be reporting about it at all because itâ€™s so against their idea of sectarianizing Syria between Shiaâ€™s and Sunnis,â€ he observed.

Rattansi also expressed hope that in the context of todayâ€™s bombing, â€œthe whole idea of a NATO-backed instability creation in Syria, and three million displaced people in Syria, people within the State Department in Washington will realize that funding must stop for these insurgent groups.â€ (RT News)