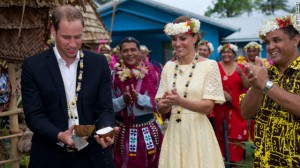 Topless photos of Catherine, Duchess of Cambridge, hit newsstands in yet another country Thursday, as a magazine in Denmark became at least the fifth outlet to run the pictures causing headaches for Britain’s likely future queen.

The Danish gossip magazine Se och Hoer ran the photos a day after its sister publication in Sweden did.

“It’s a set of unique photos from an A-class celebrity. We are a leading gossip magazine in Denmark, and it is my job to publish them,” Henningsen said. “If the British royal family want to sue us, then it will happen then and we’ll deal with it.”

Closer was fined Tuesday for publishing the topless photographs, and ordered not to distribute the magazine in print or online.

A French court ordered the magazine to hand over the original photos to the royal family within 24 hours of the ruling and to pay them 2,000 euros (about $2,600).

The magazine must pay a further 10,000 euros a day if it is late in handing over the photos.

The magazine declined to say whether it has complied with the order.

The royal family filed a criminal complaint seeking invasion of privacy charges against Closer and possibly the photographer, a palace spokeswoman said.

Se och Hoer’s editor in Sweden, Carina Loefkvist, would not discuss the identity of the photographer, but she did say her magazine bought the images Friday.

The criminal and civil legal battle over the photographs would not deter the magazine, she said.

“We don’t treat royalties different to other celebrities, so we would have published the photos anyway,” she said. “We valued the news value.”

A spokesman for the royal family declined to comment on the Danish and Swedish magazines’ decisions “save to say that all proportionate responses will be kept under review.”

Catherine and her husband, Prince William, the second in line to the throne, “welcome the injunction that’s been granted. They always believed the law was broken and that they were entitled to their privacy,” the palace said.

French law provides for “draconian sanctions” to protect against invasions of privacy, British lawyer Charlotte Harris said, including orders to take magazines off shelves and the imposition of serious fines.

Chi and Closer are owned by the Mondadori publishing company, which is headed by Marina Berlusconi, daughter of former Italian Prime Minister Silvio Berlusconi. (CNN)