<![CDATA[A flight packed with tourists crash-landed on a road in central Burma on Christmas Day, killing at least two people and injuring 11, officials said. Four foreigners were among the injured on the Air Bagan flight. The information ministry initially identified those killed as three Burmese citizens: a tour guide and an 11-year-old child on board the plane, and a man riding a motorcycle on the road where the plane came down. A later report from the airline mentioned only two deaths. <a href="http://www.eelamenews.com/?attachment_id=107669" rel="attachment wp-att-107669"> 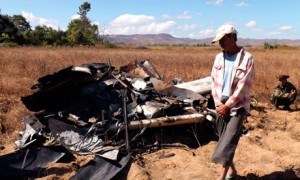 The flight was carrying 71 people, including 48 foreign passengers, from the city of Mandalay to Heho airport in Shan state, the gateway to a popular tourist destination, Inle Lake, Air Bagan said. The airline identified the injured tourists as two Americans, a French national and a Taiwanese. It initially described the incident as an emergency landing and later said “the plane hit electrical cables about a mile from Heho airport as it descended and landed in rice fields”. It said the plane burst into flames two minutes after the passengers were safely evacuated by the crew. Authorities gave a different account, saying the pilot mistook the road for a runway due to bad weather. “While descending, the plane mistakenly landed … due to fog beside the runway,” state television reported. (The Guardian)]]>