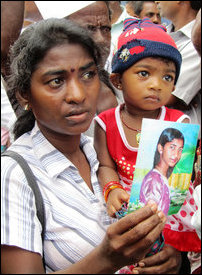 As part of a campaign promoting ethical tourism in Sri Lanka, the Sri Lanka Campaign for Peace and Justice has recently uncovered evidence that a range of British tour operators are currently offering holiday packages that provide commercial benefit to alleged perpetrators of human rights abuses.

The announcement comes in time for Wednesday’s “Responsible Tourism Day” at the London World Travel Market 2012[1]. Lonely Planet recently listed Sri Lanka the number one place to visit in 2013.

Provocatively titled “think again,” our campaign seeks to enable holiday-makers to make informed choices about tourism providers to ensure that their holidays do not benefit known human rights abusers. We are at the same time eager to highlight the many positive steps that holiday-makers can take so that their spending contributes to developing local communities and legitimate businesses.

We name and shame five hotels, four airlines, and four attractions that have links to the military as well as highlighting concerns surrounding three major hotel chains. We further name and shame twelve international tour operators that use these businesses, including Virgin, STA Travel and Thomas Cook.

Launching the campaign, Edward Mortimer, chair of the Sri Lanka Campaign for Peace and Justice said,

“Many people go on holiday to Sri Lanka without realising that as recently as three years ago tens of thousands of civilians were slaughtered there, in the closing stages of the civil war; that the north of the country remains under military occupation; that its people are still traumatized, many of them disabled or otherwise prevented from earning their living; and that people in any part of the island who fall foul of the government are liable to be kidnapped, beaten and often killed. Our campaign is designed to help tourists make informed choices, so that they spend their money in ways that help reconstruction and rehabilitation rather than lining the pockets of criminals.”