Morgan Tsvangirai, the Zimbabwean prime minister, has agreed to pay a former girlfriend an estimated £150,000 in an out-of-court settlement after he married another woman in September.

Locardia Karimatsenga, 40, claimed Mr Tsvangirai, 60, married her in a customary ceremony last year. She had been seeking maintenance payments of £10,000 a month to keep up the lifestyle to which, she said in court papers, she had become accustomed. 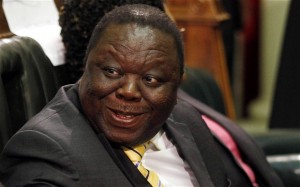 But on Thursday, it was confirmed that Mr Tsvangirai and Mrs Karimatsenga had settled their dispute with a lump-sum payment, understood to be £150,000.

The announcement has shocked Mr Tsvangirai’s aides, who say he has no income beyond his monthly salary of about £2,000 a month and no assets since he was an impoverished trade unionist before he entered politics 13 years ago.

Several senior members of his Movement for Democratic Change party are now anxious that he is compromised by his lifestyle including his recent lavish wedding to mother of three, Elizabeth Macheka, 35.

One aide said he expected President Robert Mugabe’s party to generate financial impropriety charges against Mr Tsvangirai ahead of next year’s elections,

“We are embarrassed,” said another MDC official. “Of course Zanu PF will try and find out where he got the money. This is inappropriate behaviour when we look at our supporters’ poverty.”

Zanu PF accuses the MDC of being funded by western governments – it has been illegal for the country’s political parties to receive foreign donations since 2002.

Mr Tsvangirai’s wife Susan died in a car crash in 2009. A year later, his love life made headlines after a 23-year-old woman bore him a child and he refused to support the baby until she threatened to take him to court.