Turkish F16 fighter jets forced a Syrian airline passenger plane to land in Ankara over suspicions it was carrying “non-civilian” cargo, says the Turkish Foreign Ministry. The Damascus-bound plane, which had departed from Moscow, is being inspected.

Earlier, Turkish media speculated that the plane was diverted on suspicions that it might be transporting heavy weapons.

The plane was forced to land in Ankaraâ€™s international airport at 5:15 pm local time. The Airbus A-320 was carrying 35 passengers.

The Airbus was intercepted on its way from Moscow by F-16 jets as it entered Turkish airspace. A Turkish Foreign Ministry official confirmed that a Syrian plane was forced to land at the capital’s Esenboga Airport, and that authorities were “inspecting the plane”, but would not provide further information. 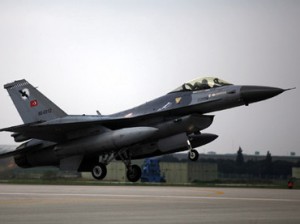 Turkey is determined to stop any transfer of weapons to Syrian administration through its airspace, the Foreign Ministry said Wednesday.

“All civilian flights in Syrian airspace have been stopped since it is no longer safe,” the ministry also added in a statement, as quoted by the Hurriyet Daily News.

Syrian authorities have not yet commented on the reports.

Tensions between Turkey and Syria have escalated since a Syrian shell killed five civilians in the border town of Akcakale last week.