Turkeyâ€™s parliament has authorized cross-border military operations into Syria â€˜when necessary.â€™ The move follows a cross-border mortar-shelling into Turkey which Damascus has apologized for. 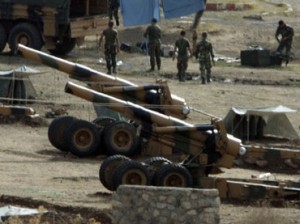 The Turkish parliament voted 320-129 in favor of the bill, though the government was quick to eliminate the perception they country preparing for a unilateral military assault.

Turkish Prime Minister Recep Tayyip Erdogan said Turkey “does not want to “start a war” with Syria while speaking at a press conference on Thursday evening .

“All we want in this region is peace and security. We have no intention of starting war. We are aware of the outcome, consequences, of war in Iraq and Afghanistanâ€¦we see the same in Syria,” Al Jazeera cites him as saying. But Errdogan warned the country was capable of defending itself against threats after he claimed that new shells coming from Syria had landed on Turkish soil on Thursday.

“An accident can be called ‘an accident’ once, twice, three times, but four, five six times,” Errdogan continued.

His statements regarding the bills follow those made by Deputy Prime Minister Besir Atalay following the vote on Thursday.

â€œThe bill is not for warâ€¦ It has deterrent qualities,â€ he said.

Atlay stressed that Turkeyâ€™s priority was to act in conjunction with â€œinternational institutionsâ€ on Syria. He further said the Syrian government “has admitted what it did and apologized. The deputy premier added that Syria had given its assurances “such an incident would not be repeated.”

Syria’s UN envoy said on Thursday that â€œSyrian authorities confirmed that they are seriously investigating the source of the [attack] that lead to the death of Turkish citizens.â€

Ambassador Bashar Ja’afari read out a letter which had been delivered to the UN Security Council expressing Syria’s “deepest condolences” to the families of the victims of Wednesday’s mortar attack which killed five civilians in southeast Turkey.

He called for both sides to act “wisely” and “rationally”, saying that “undisciplined, armed terrorists” operating on the countries’ shared border posed a threat not only to Syria, but the greater region. He further claimed the long Turkish-Syrian border had been used as a conduit for terrorists to smuggle arms into Syria.

Ja’afari insinuated the Turkish response to the incident had been disproportionate, however, saying that Turkey had shelled southern Syria for nearly 12 hours straight following Wednesday’s attack.

Ja’afari criticized “one member” of the UN Security Council for finding “itself incapable of issuing an official position to condemn these terrorist attacks” that killed dozens in Aleppo on Wednesday.

A document posted online by an al-Qaeda affiliated group called the al-Nusra Front claimed responsibilty for the multiple bombings, but the UN security coucil has thus far remained silent.

US Secretary of State Hillary Clinton in contrast was quick to condemn Syria for Wedensday’s mortar attack in Turkey. “We are outraged that the Syrians have been shooting across the border. We are very regretful about the loss of life that has occurred on the Turkish side. We are working with our Turkish friends.”

‘You can wage a world war’

The government-initiated debates in the Turkish parliament to decide on how hammer out a response to Wednesday’s cross-border incident took place behind closed doors. The cabinet of Turkish Prime Minister Tayyip Erdogan claimed the Syrian military had launched an act of aggression against Turkey.

MP Muharrem Ince from the opposition Republican Peopleâ€™s party said the motion was dangerous as it had no clearly defined limits.

“You can wage a world war with [this motion],”HÃ¼rriyet Daily News cites him as saying.

Ince also lambasted the fact that the session took place outside of the public view.

“Why would you hide this from the people? Will it be your children that go to war? People are not going to know why they have sent their children to war,” he said.

On Wednesday at least three mortar bombs fired from Syria killed five civilians and wounded at least eight in the Turkish town of Akcakale. It was the second such mortar attack on the Turkish town since last Friday. Foreign Minister Davutoglu warned he would take action if there were a repeat in the wake of the shelling.

After a heated debate an urgent parliamentary session has opted to apply the new law.

Originally the bill targeted militants of the Kurdistan Workers Party (PKK) fighting for independent Kurd state for the last three decades. The Kurds have bases in northern Iraq, de-facto not controlled by the government in Baghdad. The Turkish military has conducted a number of air and ground assaults on Kurdish positions in Iraq, most of them considered successful.

The debates around the move have sparked sharp negative reaction among the Turkish population. While a small group of anti-war protesters rallied outside the Turkish parliament in Ankara, a real anti-war storm has been initiated by Turkish and foreign activists on social networks both inside and outside of Turkey. The hashtag #savasahayir (no to war) quickly spread beyond Turkish borders into global social networking.

‘Turkey should proceed with caution’

Former Pentagon official Michael Maloof told RT Turkey would likely exercise caution, as they did when Syria shot down a Turkish fighter in June.

â€œIf you look at the example of the shoot down of the aircraft, they did go to NATO, they did everything under Article 4 [which allows for consultations if a NATO state feels threatened]. They did it again as a result of this incident. I think it is in Turkeyâ€™s interest to proceed very, very cautiously. They donâ€™t want to get into a full conflagration with the Syrians, and also you have a lot of background pressure, particularly from the Russians, for calm,â€ he said.

Maloof also stressed that the actual source of the mortar attack had not been confirmed, as the opposition could use such an assault to provoke a Turkish military response.

â€œI think there still needs to be an investigation of that [attack], but I think Turkeyâ€™s going to remain very cautious. I donâ€™t think they are going to try to get NATO to launch [an attack] under Article 5 [NATOâ€™s key collective defense principle]. Frankly I donâ€™t think NATO would be in the position or have a desire to do that,â€ he said.

â€œConsequently, rather than push that issue and cause a potential rift between Turkey and NATO, I think Turkey could, conceivably under the authorization of its parliament, at least set up a buffer zone just inside Syria to prevent this from happening again,â€ Maloof continued.

Eric Draitser, a geopolitical analyst from stop imperialism.com told RT that he believes Syrian rebels based on the border may be emboldened by Turkeyâ€™s announcement and feel they are protected from Syrian troops.

â€œThe Adena base, which is, as was reported by Reuters, right around Incirlik NATO base inside of Turkey, this is one of the centers of Jihadists, which are infiltrating into Syria, now we have this revelation that Turkey is at least formally preparing for war, its entirely likely that they will use that as the pretext for unleashing at least a new wave of infiltrations into Syria,â€ he said. (RT News).