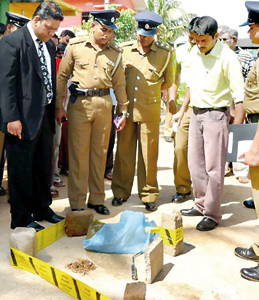 Two killings have been reported in the Northern Province, one in Kokkuvil, Jaffna, the other in Uppukulam, Mannar. The victims have been identified as Neomal Somaratne, 32 years. He was a resident of Polonnaruwa, employed by the Survey Department in Mannar. The second victim, R. D. Nishantha Sampath Rajapaksa, 35 years, was a supervisor for a private road development company. A Sri Lankan Police team that included Deputy Inspector General (DIG) Neil Daluwatte, Jaffna Police Superintendent (SP) Mohamed Jiffry, and Headquarters Inspector (HQI) Saman Sigera visited both crime scenes. SSP Jiffry told the  Colombo based Sunday Times that no motive for the killings has been established. Yesterday Mannar Magistrate Anthonypillai Judeson visited the crime scene at Uppukulam. According to the Police, Mr. Somaratne was living in a rented house with four colleagues. The victim was apparently alone at the time of his death. The other tenants had gone home for the weekend. Mr. Somaratne’s body bore stab injuries and burns. The Kokkuvil, Jaffna victim was found by a roadside, near a Hindu temple. The body bore multiple knife injuries, according to the Police. (Photo: ST)]]>