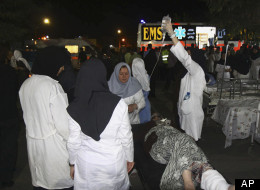 Two strong earthquakes killed 180 people and injured about 1,500 in northwest Iran where rescuers frantically combed the rubble of dozens of villages through the night into Sunday.

Thousands fled their homes and remained outdoors after Saturday’s quakes, as at least 40 aftershocks hit the area.

Casualty figures could rise, Iranian officials said, as some of the injured were in a critical condition while other people were still trapped under the rubble and rescuers – hampered by the darkness – had yet to reach some affected villages.

Six villages had been destroyed and about 60 had sustained more than 50 percent damage, Iranian media said. (Reuters)