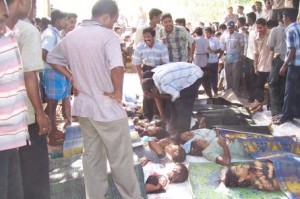 TYO-UK remembers the 5th anniversary of the attack on Sencholai orphanage and the children who lost their lives in the air raid.

On the 14th of August 2006, sixteen bombs were dropped by Sri Lankan Air Force jets killing 53 female students and injuring many more. The students had been attending a first aid course in an orphanage. Only a short-while before the bombings, the coordinates of the orphanage had been given to the ICRC who in turn had informed the Sri Lankan state.

Though the Sri Lankan government predictably accused the young girls of being LTTE cadres and the orphanage of being a training camp, UNICEF, the SLMM and the UN severely condemned the attack as the massacre of innocent children. There has been no inquiry into the attacks at Sencholai and no one has been held accountable for the killings.

This atrocity was not an isolated incident. Sadly, it was but another point in the long systematic genocide of Tamils by the Sri Lankan state, under the pretence of fighting terror.

The harrowing crimes broadcast in ‘Sri Lanka’s Killing Fields’ the documentary by Channel 4 were being committed by the same members of the security forces that are still in charge of ‘security’ of the Tamil people in the North-East of the island. The report by the UN panel of experts accused Sri Lanka’s military and paramilitary forces of rape, abduction and murder of Tamil children, particularly once they had been compelled into and effectively imprisoned inside IDP camps. The Sri Lankan government has not made any meaningful attempt at investigating these crimes.

Whilst much of the world’s focus is on the mass killings of May 2009, it must not be forgotten that the slaughter of over 40,000 civilians was not the result of an unexpected tragedy, but a part of the genocide unleashed on the Tamil Nation.

Five years on and tens of thousands of deaths later, the genocide of Eelam Tamils continues. (TG).