<![CDATA[ <div id="article-body-blocks"> The British government has defended the arrest and prosecution of a suspected Nepalese government torturer who is scheduled to face an Old Bailey hearing at the end of the month. 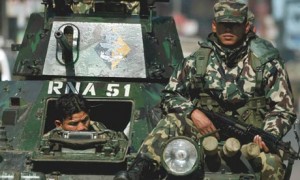 Colonel Kumar Lama, 46, appeared at Westminster magistrates court on Saturday charged with torturing two men in an army barracks in Nepal in 2005 towards the end of the decade-long civil war between anti-monarchist Maoist extremists and government forces that cost 13,000 lives and left another 1,300 people missing. The married father-of-two had been arrested in St Leonards-on-Sea, East Sussex, where he was understood to have been visiting family members. Lama was working as part of the UN peacekeeping mission in South Sudan and he was about to return to Africa when he was arrested. The decision to prosecute was authorised by the attorney general, Dominic Grieve, and has sparked a diplomatic row between Kathmandu and London. Nepal’s ruling party has complained it was an “objectionable” intervention in Nepal’s internal matters. The country’s deputy prime minister, Narayankaji Shrestha, told reporters that his government had demanded the immediate release of Lama and Nepal instructed its London embassy to submit a protest note to the British government. But lawyers for the alleged victims welcomed the British authorities’ decision to employ principles of universal jurisdiction, which allow crimes of torture to be prosecuted in the UK regardless of where they happened. The case is seen as potentially significant by campaigners for post-conflict justice in the Himalayan state because, despite well-documented atrocities on both sides, there have so far been no prosecutions in Nepal. After the arrest, Nepal called in the British ambassador to Kathmandu, John Tucknott, to protest but Tucknott told them it was the UK’s obligation to act. “The ambassador explained to the ministry of foreign affairs that the action was taken by the Met police according to the UK law and the UK’s international obligation to uphold human rights as a party to the UN convention against torture,” a spokesman for the Foreign and Commonwealth Office said on Sunday. Lama is being held in custody until his trial and spoke to confirm his name in court on Saturday where he appeared charged with two counts of torture. The first of the alleged crimes took place in the last two weeks of April 2005 and the second between April and October of the same year, both at Gorusinghe army barracks in the Kapilvastu district where Lama was the army officer in charge. He is accused of “intentionally inflicting severe pain or suffering” on two men, Janak Bahadur Raut and Karam Hussain, while he was “a public official or person acting in an official capacity and in the performance or purported performance of official duties”. The decision to prosecute has been praised by campaigners for justice for victims of alleged war-time atrocities in Nepal. Brad Adams, Asia director at Human Rights Watch, said: “The lesson for the Nepal government is that those responsible for tackling crimes in other countries are ready and willing to investigate and prosecute torture, something Nepal’s culture of impunity has failed to do in seven years of peace.” There have been close military ties between Britain and Nepal, rooted in the Gurkha regiment of the British Army. Between 2000 and 2004 the UK government gave military aid to Nepal including planes, helicopters, Land Rovers, radios and night vision equipment, according to Amnesty International. The decision to charge Lama is the latest evidence of the UK’s sensitivity to allegations of human rights abuses against Nepalese people. Last November there were unconfirmed reports that the UK had denied a visa to Nepal’s inspector general of police, Kuber Singh Rana, amid human rights groups’ concerns at his role during the civil war. Nepal’s supreme court approved his promotion to police chief after it found charges of human rights violations against him could not be proved. (The Guardian).