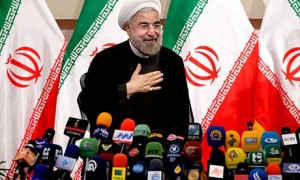 Britain will not be sending a representative to next month’s inauguration of the new Iranian president, Hassan Rouhani, despite an invitation from Tehran.

A Foreign Office spokeswoman said the agreed European Union position was that the ceremony on 4 August would only be attended by Tehran-based diplomats. The UK has not had diplomatic representation there since the British embassy was ransacked by a mob in November 2011.

Iran has said that leaders from around the world, with the notable exception of the US and Israel, have been invited to the inauguration – previously a low-key event.

The foreign ministry in Tehran said Presidents Hamid Karzai of Afghanistan and Asif Ali Zardari of Pakistan had already accepted the invitation, as had the Lebanese president, Michel Suleiman, and the Syrian prime minister, Wael Nader al-Halqi. There are reports in the Russian press that the president, Vladimir Putin, may visit later in August.

Karzai’s office has confirmed he will travel to Tehran, but the attendance of other leaders is yet to be confirmed.

The global invitation has been widely seen as an Iranian attempt to use the election of Rouhani, a reformist and former nuclear negotiator, as an opportunity to loosen the isolation the west has tried to impose on Iran.

The US and EU have placed severe trade and financial restrictions on Tehran to try to persuade it to curb its nuclear programme, which Iran insists is for peaceful purposes, but the west believes is intended to provide the capacity for making a nuclear warhead.

The UK’s foreign secretary, William Hague, said last week that Britain is ready to step up contacts with Iranian officials. But the Foreign Office spokeswoman said the normalisation of bilateral diplomatic ties would ultimately depend on reliable Iranian assurances of the safety of British diplomats, and “in major part” on progress in multilateral nuclear negotiations.

The EU foreign policy chief, Catherine Ashton, has offered to resume those talks after the inauguration.

A former British ambassador to Tehran, Sir Richard Dalton, said the UK decision not to attend was “entirely reasonable”.

“This is a very difficult historical relationship which, if we are to mend it, both sides will have to go slowly and not give rise to expectations they can’t deliver on,” Dalton said.

“In order to create a platform for improving relations with Britain, the new Iranian government is going to have to tread carefully with its own right wing.”

He added that it was normal for Brussels to co-ordinate the European level of representation at official Iranian events to avoid sending mixed messages to Tehran.

Iranian media have reported that the former UK foreign secretary, Jack Straw, would be attending the inauguration, but his office said on Wednesday that no formal invitation had been issued by Tehran. (The Guardian)