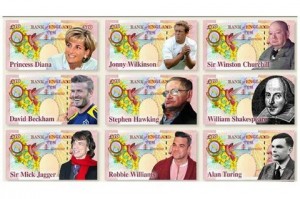 David Beckham, Princess Diana and Robbie Williams are all ­being considered to appear on the new £10 note.
The Bank Of England has released a list of more than 150 great Britons that have been suggested by members of the public for the honour when the new notes are printed.
Princess Diana, who died in a Paris car crash in 1997, has been nominated – as have the late Queen Mother and the Duke of Edinburgh. Former England captain Beckham is listed alongside fellow sports stars ­including cricket’s Michael Vaughan and rugby’s Jonny Wilkinson.
The Beatles, Sir Mick Jagger and ­ex-Take That singer Robbie are favourites from showbiz to appear on the new Series F note when it replaces the current Series E featuring scientist Charles Darwin. A source said: “It’s certainly an intriguing list of suggestions and reflects the wide variety of talented people the nation considers worthy of recognition.”
Political figures such as Sir Winston Churchill and suffragette Emmeline Pankhurst are listed alongside TV stars including John Cleese, Michael Parkinson and Terry Wogan. Literary giants William Shakespeare, Geoffrey Chaucer and George Orwell are included as are ­scientists including Stephen Hawking and Sir Alexander Fleming.
But overall favourite is Second World War Enigma codebreaker Alan Turing, the computer pioneer who died aged 41 in 1954 following a criminal prosecution for his homosexuality. An online petition calling for his achievements to be recognized has been signed by more than 25,000 people. http://www.bankofengland.co.uk/Pages/home.aspx
]]>