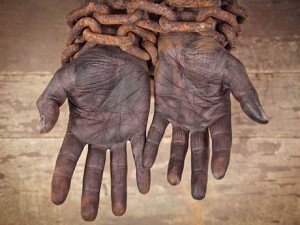 Researchers at University College London spent three years compiling a searchable listing of thousands of people who received compensation for loss of their “possessions” when slave ownership was outlawed by Britain in 1833.

About 46,000 people were paid a total of 20 million pounds – the equivalent of 40 percent of all annual government spending at the time – after the freeing of slaves in British colonies in the Caribbean, Mauritius and southern Africa.

“This is a huge bailout,” said Keith McClelland, a research associate on the project. “Relatively speaking, it is bigger than the bailout of the bankers in recent years.”

Compensation for slave-owners was opposed by some abolitionists, who argued it was immoral, but it was approved as the political price of getting the 1833 abolition bill passed.

The database includes details on the 3,000 compensated slave owners who lived in Britain – rather than its colonies – and includes the ancestors of several present-day politicians and the writers Graham Greene and George Orwell. Orwell’s real name was Eric Blair, and the trustees of his great-grandfather, Charles Blair, were paid 4,442 pounds for 218 slaves on a plantation in Jamaica.

Not all the slave-owners were ultra-wealthy. Middle-class Britons up and down the country were paid compensation – evidence, the researchers say, of how far the tentacles of slavery spread through society.

Payouts range from wealthy merchant John Gladstone, father of 19th-century Prime Minister William Ewart Gladstone, who received more than 100,000 pounds in compensation for hundreds of slaves, to Jane Bayne, a Scottish doctor’s wife who received 84 pounds for 10 slaves on a plantation in Jamaica. Even that modest settlement was more than the annual salary of a skilled worker at the time.

This is not the first online database to try to chronicle the trade that took more than 10 million Africans across the Atlantic to the Americas. Emory University in Atlanta has a site with information on 35,000 slave ship voyages, and the University of North Carolina at Greenboro has compiled online listings of slaves and slave-owners.

McClelland said the London project would expand understanding of how the legacy of slavery still affects Britain.

He said 10 percent of wealthy 19th-century Britons were directly connected to the slave trade, and its proceeds helped build railways, businesses, buildings and art collections that still exist today.

“You are talking about a very important component of the British economy from the 17th century onwards,” McClelland said.

Britain’s Parliament abolished the slave trade in 1807, but slavery itself was not outlawed in its colonies until 26 years later. The United States followed in 1865 and Brazil in 1888.

In 2006, then-Prime Minister Tony Blair expressed “deep sorrow” for Britain’s role in the trans-Atlantic slave trade, though some felt that fell short of a full apology. The next year he said: “I have said we’re sorry and I say it again now.”

The research could give momentum to those who argue that reparations should be paid for slavery. Barbados and Jamaica have both set up commissions to study the possibility of suing Britain over the legacy of the slave trade.

Esther Stanford-Xosei of the Pan-African Reparations Coalition in Europe said the database was an important contribution to the debate over reparations, which she said should be as much cultural as financial.

“Reparations means to repair the harm_ and there are not only economic harms or legacies,” she said.

“This research is in itself an aspect of educational reparations because it is telling a narrative and a history that is not mainstream, that is not included in the curriculum. It shows how widespread the benefits of African chattel enslavements were – and not just to the elites.”