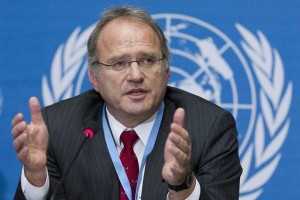 The UN Special Rapporteur on extrajudicial, summary or arbitrary executions, Christof Heyns has said he wants to visit Sri Lanka.

In a report submitted to the UN Human Rights Council (UNHRC) ahead of its 23rd session scheduled for next week, Heynes said he encourages the Governments of Sri Lanka to accept his pending requests for a visit.

The UN envoy had made repeated requests to visit Sri Lanka but has not received a response from the government.

In April 2011, the Special Rapporteur concluded that one Chanel 4 video on Sri Lanka was authentic and the events reflected in the video footage occurred as depicted.

The Special Rapporteur had concluded that the video footage indicates the commission of serious crimes, which should together with any other available evidence be examined systematically and professionally by domestic investigators appointed by the Sri Lankan Government, as well as by an independent, international investigational body, with a clear mandate to establish who should be held accountable for the killings.

In May 2011 the SL government had said it is ready to constructively engage with the Special Rapporteur in the future on the basis of transparency and fair processes being adopted.

The Sri Lanka said that progress achieved through domestic procedures and mechanisms will be communicated to the Special Rapporteur upon completion of internal processes.