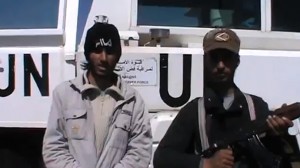 Twenty UN peacekeepers have been taken hostage in the Golan Heights on the border between Syria and Israel after Syrian rebels seized their convoy. The United Nations Security Council has demanded the observers’ immediate release.

A young fighter saying he was from the “Martyrs of Yarmouk” said the peacekeepers would not be set free until Syrian government forces withdrew from the village of Jamlah, a mile east of the ceasefire link with the Israeli-occupied Golan, Reuters reports.

“If no withdrawal is made within 24 hours we will treat them as prisoners,” he said, claiming the UN forces had collaborated with Syrian government troops to drive the fighters out of the village.

After a video appeared on YouTube showing several armed-rebel fighters standing in front of two white armored vehicles bearing the UN inscription with at least five peacekeepers inside, the UN confirmed the incident.

“The UN observers were on a regular supply mission and were stopped near Observation Post 58, which had sustained damage and was evacuated this past weekend following heavy combat in close proximity, at Al Jamlah,” the United Nations said in a statement issued in New York.

Mentioning an attack on Monday which killed 48 Syrian servicemen and nine Iraqi law enforcers, Churkin said the Golan incident showed “some people are trying very hard in order to extend the geography of the Syrian conflict.” The incident follows a statement on Wednesday by the Arab League offering military support to the Syrian rebels. Previously the League had only offered to support the Syrian opposition via humanitarian and diplomatic assistance.

Arab League Secretary-General Nabil Elarby also told a press conference the Syrian Opposition Coalition had been formally invited to send a representative to attend a league meeting to be held in Doha in April.

The Russian Foreign Ministry announced last week that any decision to send aid to rebel fighters would intensify the two year Syrian civil war by encouraging “extremists to seize power by force.”

On Monday Israel warned the UN Security Council it could not be expected to “stand idle” as the Syrian civil war expands beyond its borders, while Churkin said that armed groups operating out of the Golan were undermining regional security.

“It’s of course something very dangerous they are doing by staging armed activity from that area. It’s something which can undermine security between Syria and Israel. So whoever is supporting that kind of activity or approving it tacitly is playing a very dangerous game,” Churkin warned.

Israel captured the Golan Heights from Syria during the 1967 war. The country agreed to return the land to Syria in return for a peace agreement that was rejected by the Arab world.

During the 1973 Yom Kippur War, Syrian forces crossed the ceasefire line into the Golan Heights in an attempt to retake the territory. Syria’s troops were repelled by Israeli forces.

Israel annexed the Golan in 1981, though they returned about 5 percent of the territory to Syria. The land was merged into a demilitarized zone that is currently patrolled by UN peacekeeping forces.