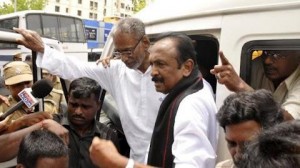 The Report of the UN Secretary-Generalâ€™s Internal Review Panel on United Nations Action in Sri Lanka, submitted to Ban Ki-moon and made public yesterday, offers a strong indictment of the UNâ€™s response to Sri Lankaâ€™s armed conflict. It deals with a period of conflict in Sri Lanka when very grave violations of international law are alleged and where effective UN action might have averted some of the worst of the violations.

Instead the text describes a scenario where UN officials repeatedly failed civilians they were entrusted protect, while ignoring or downplaying mounting evidence of war crimes compiled by their own staff as they struggled to appease Sri Lankan authorities intent on restricting humanitarian space.

â€œUnfortunately this report confirms the UN inaction and Indiaâ€™s involvement in Sri Lankan genocideâ€, he said.

He to renew its call for an independent investigation into alleged war crimes by the Sri Lankan army and urges Tamils around the world to protest the UN inaction in war and after the war.