<![CDATA[A UN official charged with investigating Japanâ€™s handling of the health risks from the Fukushima nuclear disaster in 2011 says the authorities are not doing enough to protect the population from effects of the accident. <!--RTEditor:genereated--> 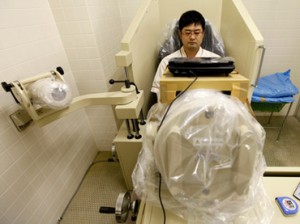 Anand Grover, a UN special rapporteur on the right to health, says the Japanese government is not screening enough of its people, and is being overly optimistic with radiation exposure thresholds. Grover has just conducted an independent on-site report for the government. Currently, only residents of the Fukushima area surrounding the power plant that failed after the tsunami and earthquake caused its reactors to melt down in March 2011 are given medical screening. Only a quarter of the regionâ€™s 2 million people have been tested so far. Grover believes that the check-ups should be extended throughout the North East of Japan, as radiation may have spread in an unpredictable pattern. â€œThe government has to err on the side of caution,” he said. He is also upset the government has chosen to play down the risks associated with radiation exposure. It has labelled only contaminated areas around the plant with radiation of above 20 millisieverts per year as off-limits. These are the limits adopted by radiation industry workers, who are properly trained in handling contaminated materials, and exceed similar civilian limits by over three times. In its official pronouncements and literature, the government also reassures the population that exposure of under 100 millisierverts per year is unlikely to be harmful. Grover does not agree. “They draw on the limited lessons from the Chernobyl accident and ignore epidemiological studies that point to cancer as well as other diseases in low-dosage radiation,” Grover said. A World Health Organization (WHO) report leaked to the Asahi Shimbun newspaper over the weekend showed that cumulative exposure from the accident in towns around the damaged plant was between 43 and 122 millisieverts. Grover has also chastised the government for its top-down approach to handling the situation. The government has relied on teams of experts, and has been slow to share information with ordinary citizens subjected to the risks. Even in hospitals, those screened have often not been given their exposure results, and havenâ€™t had them properly explained. “I personally think experts only know part of the real situation. Communities must be involved,” the rapporteur summed up. The parallel WHO report, which used statistics from previous accidents, estimated that the overall increase in cancers was likely to be insignificant. Nonetheless, in some areas the number of thyroid cancers among children is expected to go up by more than nine times, while the incidence of leukaemia is expected to double. (RT News)]]>