<![CDATA[The UN Security Council has no right to support a revolution or foreign intervention in Syria, Russian Foreign Minister Sergey Lavrov warned. Any plan to withdraw government troops while fighting continues is untenable, and naÃ¯ve at best, he added. <!--RTEditor:genereated-->Â­ 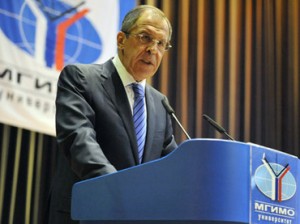 The demand for President Bashar al-Assad to resign as a precondition to resolving the Syrian crisis is a completely unrealistic approach, Lavrov said during a public appearance at the Moscow State University of Foreign Affairs. â€œThere are different attitudes towards the Syrian regime. But while fighting in the streets continues, it is absolutely unrealistic to say that the only way out is for one side to unilaterally capitulate. It is not a matter of ideology, we donâ€™t support any political figures in Syria. We just reason from what is realistic,â€ Lavrov said to the students of the diplomatic university. Harking back to the summit in Geneva in June, Lavrov noted that despite differing opinions on the conflict, all the participating countries agreed to work for a â€œfree, stable, independent and democraticâ€ Syria. However, â€œour western partners and some nations in the region are almost openly pushing for outside intervention,â€ said Lavrov. â€œOutside intervention should be positive. Every international player should push for both sides of the Syrian conflict to cease violence,â€ stressed Lavrov. â€œSaying that the government should be the first to pull out its troops from towns and then the opposition is not a viable plan.â€ The Russian foreign minister added that those foreign players who insist on inciting the opposition forces â€œare not working in the interests of the Syrian people. They are motivated by their own geopolitical interests.â€ Â­Lavrov cited the fact the Security Council dismissed a vote on the Geneva accord as evidence that a number of countries were not working for the Syrian people.

Ecuador, Assangeâ€™s rights must be respected