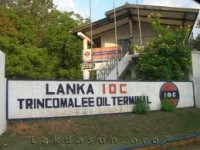 Sri Lanka yesterday announced plans that it would partially take over a strategic oil storage depot in Trincomalee from the Indian Oil BSE -0.27 % Company’s local arm after India voted in favour of a US-sponsored resolution against Colombo at the UNHRC.

There had been unconfirmed reports in the local media that the government was eying the 99-tank storage facility in the north-eastern port district of Trincomalee, but SL Information Minister Keheliya Rambukwella today announced at the weekly cabinet press briefing the plans to take back unutilised tanks from Indian Oil Company’s local arm known as Lanka IOC.

Rambukwella said there were provisions to re-possess tanks that were not used by the Indian Oil Company’s local unit, Lanka IOC, which bought one third of the government’s retail oil business in 2003.

In line with the privatisation, Sri Lanka gave the World War II tank farm of 99 storage tanks in the north-eastern port of Trincomalee to Lanka OIC which is using 15 of them and refurbishing two more.

The decision was announced as India voted with the US at the UN Human Rights Council in Geneva criticising Sri Lanka’s rights record, but Rambukwella said the decision to partially take back the tank farm had nothing to do with the UNHRC vote.

“Sri Lankan government has been negotiating with us for some time. I would say its been a few months. We have’nt heard anything from the government,” Dakwale told PTI.