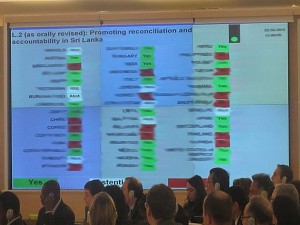 The UN Human Rights Council (UNHRC) today adopted the US sponsored resolution on Sri Lanka with 25 in favor, 13 against it and 8 abstentions.

Minister Mahinda Samarasinghe, speaking as a concerned country, said that the resolution was unacceptable to Sri Lanka.

He said that the draft resolution casts aspersions on a domestic process which is ongoing in Sri Lanka.

The Minister also said that the resolution “smuggles in” parts of the UN Experts Panel report which was already rejected by the Sri Lankan government.

The Minister also questioned why so much focus is being put on Sri Lanka, more than three years after the war, even when there are conflicts in other countries.

In a toned down document as compared to the previous drafts, the resolution requests the Office of the High Commissioner for Human Rights, with input from relevant special procedures mandate holders, as appropriate, to present an oral updateto the Human Rights Council at its twenty-fourth session, and a comprehensive report followed by a discussion at the twenty-fifth session, on the implementation of the present resolution.

The resolution welcomes the announcement by the Government of Sri Lanka to hold elections to the Provincial Council in the Northern Province in September 2013.

It also welcomes and acknowledes the progress made by the Government of Sri Lanka in rebuilding infrastructure, demining, resettling the majority of internally displaced persons, and noting nonetheless that considerable work lies ahead in the areas of justice, reconciliation and resumption of livelihoods, and stressing the importance of the full participation of local populations, including representatives of civil society and minorities, in these efforts.

India voted in favor of the US resolution on Sri Lanka at the UN Human Rights Council (UNHRC) while Japan, a close ally of Sri Lanka, abstained from voting.

Libya, which was also a close ally of Sri Lanka at one time under the previous regime, voted in support of the US resolution.