<![CDATA[The US ambassador to Libya and three other Americans were killed when local militia assaulted Washington's consulate in Benghazi. President Barack Obama has condemned the attack. <!--RTEditor:genereated-->Reports from various sources paint an unclear picture of the circumstances surrounding Ambassador John Christopher Steven’s death. 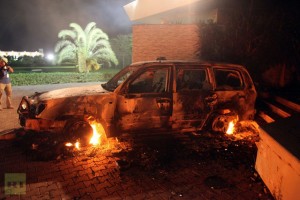 A group of extremist militia members stormed Benghazi’s US consulate on Tuesday night. Stevens may not have been killed in the Tuesday night assault, however, but rather when a second mob attacked his motorcade as it was leaving Benghazi Wednesday morning, the Guardian said. Libyan officials alleged that Islamist militants fired rockets at Steven’s car, killing him and three other embassy staffers. Witnesses cited by local media claimed that members of the hardline Islamist group Ansar Al-Sharia were among the ranks of the attackers. President Obama and NATO Secretary-General Anders Fogh Rasmussen have roundly condemned the attack, and mourned Steven’s death. “Chris was a courageous and exemplary representative of the United States. Throughout the Libyan revolution, he selflessly served our country and the Libyan people at our mission in Benghazi,” Obama said in a statement. “We apologise to the United States, the people and to the whole worldÂ  for what happened,” interim Libyan president Mohammed Magarief said in a news conference. “We confirm that no one will escape from punishment and questioning.” The US diplomatic facility in eastern Libya was evacuated following violent clashes, and a horde of militia members then stormed the building and torched it. Tunisian Salafis are now calling for an attack on their country’s US embassy, Tunisian media outlets said. Salafis militants had previously attempted to attack the embassy, but were repelled by security forces. Many in the region believe another attack is imminent. President Obama has ordered increased security for US diplomatic personnel around the world, and a Marine fleet anti-terrorist security teamÂ  has been dispatched to Libya to boost security.

The outbreak of violence is part of global Islamic outrage against the American amateur film ‘Innocence of Muslims,’ which was deemed offensive to the Prophet Muhammad. Similar attacks took place at the US embassy in Cairo, Egypt. The independent film was allegedly produced and directed by Sam Bacile, a 56 year-old Israeli-American real estate developer. According to Ynet, Bacile said he raised $5 million from about 100 Jewish donors, whom he declined to identify. On the eleventh anniversary of the September 11, 2001, terrorist attacks, controversial pastor Terry Jones released a video promoting the film, which portrays the Prophet in what he described as a “satirical” manner. The attack may also be a retaliatory tactic by Gaddafi loyalists for the arrest of the regimeâ€™s former Intelligence Chief Abdullah al-Senussi, journalist Zaid Benjaminâ€™s wrote on Twitter. Al-Senussi was extradited from Mauritania to Tripoli on September 5. The International Federation for Human Rights called on Libyan authorities to send al-Senussi to the International Criminal Court, concerned that a trial in the country would not be open and transparent. (RT New)]]>