The Pentagon disclosed that it has for the first time sent an amphibious vessel, the USS Ponce, into the region that could be used to transport a landing force. It has a capacity of about 900 troops. 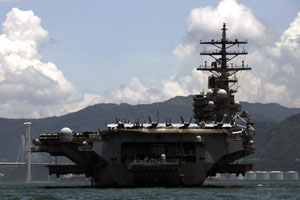 The US defence department has also doubled the number of minesweepers assigned to the Gulf to eight vessels and added an unspecified number of F-22 stealth fighters and F-15C warplanes on to two of bases.

“The message to Iran is: “Don’t even think about it,'” a senior defence official told the New York Times.

The scale of the reinforcements is the most significant since the beginning of the West’s stand off with Iran over its nuclear programme and reflects the growing seriousness of the confrontation since recent diplomatic efforts to end the impasse faltered.

Iran has responded with growing belligerence after talks with world powers faltered in Moscow last month.

On Monday its parliament introduced legislation to authorise a blockade of oil tankers in the Strait, through which a fifth of the world’s traded oil passes. That followed a ban on EU imports of Iranian oil which came into force on Sunday.

A three-day military exercise designed to simulate attacks on Western and Israeli targets is also under way in Iran’s northern Semnan Desert. To launch the “Grand Prophet 7” manoeuvres, Iran’s Republican Guard test-fired missiles against a model of an American base in the Gulf.

The West has long suspected that Tehran is developing nuclear weapons technology, a supposition supported by inspections of Iranian nuclear sites by the United Nation’s atomic agency over the past year.

With tensions escalating, fears that Israel could launch military action on its own have mounted. It would regard an Iranian nuclear bomb as a threat to its existence given Tehran’s repeated apocalyptic rhetoric against the Jewish state.

With Washington struggling to restrain Benjamin Netanyahu, the Israeli prime minister, the US deployment appeared partially designed to reinforce Mr Obama’s assurance that he had “Israel’s back”. (The Telegraph).