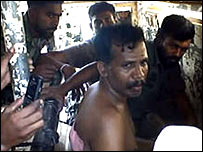 The United States Federal Court, for the Southern District of New York, granted Ramesh’s wife Vatsala Devi’s motion to proceed her appeal with the US Court of Appeals for the Second Circuit without paying the filing fees [Docket# 12-4081]. The Plaintiff is represented by Attorney Visuvanathan Rudrakumaran, Esq. Vatsala Devi in the lawsuit asserts cause of action against President Rajapaksa for torture, cruel, inhuman or degrading treatment and intentional infliction of emotional distress in violation of the Alien Torts Claims Act, Torture Victim Protection Act, International Covenant on civil and political rights and the customary international law pertaining to armed conflict. Earlier, The District Court dismissed Vatsala Devi’s claim invoking the Head of State Immunity asserted by the US Department of State on September 4, 2012.Â  Vatsala Devi filed an appeal challenging the District Court decision.Â  The appeal is currently pending before the US Court of Appeals for the Second Circuit where the case will be heard by three judges [Docket# 12-4081]. Vatsala Devi’s brief is due on January 21, 2013.Â  The Department of State’s brief is due on February 31, 2013.Â  It is expected that the case will be heard by the Court shortly thereafter. Vatsala Devi has raised the following issues in her appeal: a. Whether the Executive has a lawmaking authority to suggest Head of State immunity?; b. Whether surrendering the judicial power to the Executive violates separation of powers?; c. Whether international core crimes namely genocide, crimes against humanity and war crimes pierce the veil of Head of State immunity?; It is noted here that the District Court in its opinion made an observation that that “the plaintiff advanced several arguments to break new jurisprudential ground”. The court acknowledged “the emergence of an international criminal regime that provides no shelter even to sitting heads of state is certainly a remarkable development”. EINPresswire.com]]>