Those of us on the other end of the time line several timescales ahead of the USA will have to wait until Wednesday morning to find out whether the citizens of the United States of America have decided to move forward with President Obama or to slip back to the fumbling, bumbling elitist Republicans… 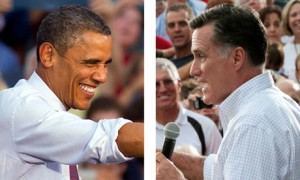 Those of us who know the American people have no doubt that the intelligent choice, nay the only choice, will be made since only four years ago, the Republican regime of George W. Bush sent the United States of America and the economy of the rest of the world sliding into the abyss as it pandered to the whims of the super-rich elitists which gravitate around that party and neuter the occupant of the White House before he can sit down in the Oval Office.

Four years ago, the United States was gripped by a vice of incompetence and corporate greed, as the likes of Bush, Cheney, Rice, Rumsfeld and their cronies played political games at the expense of their hard-working citizens and nearly sent toe citizens of the world to Hades by trying to start world war three.

Four years ago, the United States of America was synonymous with concentration camps, torture, illegal detention, murder, rape, sodomy, tyranny; four years ago, Americans would have to lie about their nationality when travelling abroad and say they were Canadians.

Those of us who know the American people also know that they understand that these massive ills cannot be righted in three and a half years. It takes time and it takes collaboration between the Presidential team and Congress. Despite the fact that the Republicans have spent the last four years trying to make things difficult for President Obama, he has set the ball rolling and it is gathering momentum. The economy is turning round, jobs are being created, the massive Bush-era investments in the military have been pumped back into the economy and the signs are starting to show.

Make no mistake: the Republican Bush-era Remnants are there waiting in the side-wings and this time around they are the bumbling old fools of yesteryear, mad and rabid for power, thirsty for war, who will send the world over the abyss as they implement 1980s-style policies in the 21st century. The world has moved on.

The American people understand this. That is why I shall awake on Wednesday morning knowing we can all move forward together, with President Obama as a trustworthy, articulate and intelligent partner in the international community.