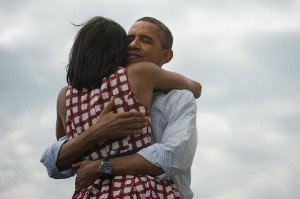 Obama’s reelection is not being met with euphoria around the world as with his first win four years ago, but rather a resigned acceptance that he is a known entity and a lesser evil, as US foreign policy is expected to chart the same course.

Moscow and Washington: The sharp edges of the Oval Office

Â­In striking contrast to the 2008 US presidential elections, keenly watched by a vast Russian audience, the 2012 Obama-Romney battle for the Oval Office, for all its twists and breathtaking moments, has little impact on most Russians.

Barack Obamaâ€™s meteoric rise to power initially evoked high expectations and was met with an outburst of worldwide enthusiasm, including in Russia. Four years later, there is little in which to toast or believe, regardless of who is in control of the White House.

Obama is not seen by Russians as an American leader on which to pin hopes for the reinforcing of US-Russian ties. (Romney, hawkish and impolite, labeled Russia as Americaâ€™s â€œnumber-one geopolitical foe.â€ Obama, somewhat polite and avoiding his challengers harsh rhetoric, launched a much-touted â€˜resetâ€™ policy with Moscow that ultimately lost steam.) There were differences in style, but not substance, between the two presidential contenders. The major bottlenecks â€“ Iran, Syria, disagreements on US anti-ballistic missile systems in Europe, renewed lecturing on Russian democracy over the notorious Magnitsky case â€“ poisoned and crippled the reset ahead of time.

There is growing evidence that Russian President Vladimir Putin is looking eastwards as part of his new Asia-Pacific doctrine and Eurasian project. As a result, US-Russian relations are left to discussions among a high caste of diplomats, as well as a handful of Russian political pundits splitting hairs over whether a bad partner in the White House is better for Russian interests than no partner at all.

Moscow and Washington now seem like an old married couple: Weary, bored and disillusioned, too tired for either a stormy divorce or for a new honeymoon.

The good news is that the ship of US-Russian relations will not sink, as Russia is too powerful to be ignored by any US administration, even one thatâ€™s virulently anti-Russian. The bad news, however, is that the ship will likely be grounded for another four years. It will stay in the dry dock, hardly fit to venture out for deep-sea sailing.

Â­Sergey Strokan is a journalist, essayist and a poet. He is also a political commentator with Russia’s â€œKommersantâ€ Publishing House.

â€œObama is a realist and he will probably have more room to reach a settlement regarding issues in the Muslim world. Obama might also be the one who co-ordinates to some extent with the new emerging regimes, such as the Morsi regime in Egyptâ€.

It is possible or likely that he will change his [Middle East] policy, especially because changing policy might be connected to American interests. We all know that the new regimes in the Arab world after the Arab Spring, these new regimes will have to be more receptive to public opinion, so America wonâ€™t have the easy task it used to have with the regimes of the Hosni Mubarakâ€™s.

Netanyahu has proven to be very stubborn; he has also proven during one of his visits to Washington where he received a standing ovation from Congress, he relies very much on the pro Israeli lobby. One thing that might be working against Neanyahu is the fact that the Jewish voice in America is no longer one block, no longer unified. And that is something that I think Obama should take advantage of, if he wants to pressure Neanyahu.â€

â€œThe Obama administration is a known quantity to the Chinese leadership. The Chinese more important concern has more to do with the fact that does the United States see Chins as a threat and therefore will it try and contain China and therefore make it difficult for China to emerge as an influential major power.

â€œThe Chinese tend to believe that the economic relationship between the two countries is very close and highly interdependent and that the economies are mutually supportive and therefore various problems can be overcome through careful negotiations.â€