The United States has all but abandoned their intelligence gathering mission on the ground in Benghazi, removing all US officials from the Libyan city where Ambassador Chris Stevens was executed three weeks earlier in an apparent terrorist attack.

The Obama administration formally withdrew all US government personnel from Benghazi this week, both officials and local residents confirm to the Washington Post, but not before allowing several American citizens to lose their lives in a deadly assault that killed Ambassador Stevens and three others. 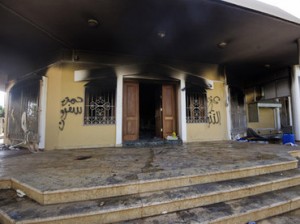 Stevens was among the Americans lost on September 11, 2012 when an assault was waged on a US consulate facility in Benghazi. Only lately, however, has the White House finally suggested that the deaths spawned resulted from a terrorist assault and were not, rather, a spontaneous reaction to an anti-Islam film that sparked violent outbursts aimed at America elsewhere in the Muslim World last month.

Now just as the Obama administration has come clean with what they say the motives of the assailants really were, American efforts to make sense of a terrorist attack is all too little and way too late. According to the latest reports, the US has removed all officials who could otherwise offer insight into the latest assault on its citizens abroad that the administration has boondoggled in the weeks since.

State Department spokeswoman Victoria Nuland confirms to the Post that â€œEverybody who was in Benghazi and posted there has been withdrawn,â€ adding that she knew of no other American officials in the region whoâ€™d be able to investigate the assault.

The message from Washington is not expected to sit well with the families of the Americans slain during the apparent terrorist attack, nor with the Libyan people who lauded the United Statesâ€™ involvement in removing former leader Muammar Gaddafi only to be left to live in a warzone rampant with anti-Western insurgency.

â€œI donâ€™t know why the Americans donâ€™t come here,â€ Wissam Bin Hamid, commander of the Libyan Shield Brigade, tells the Times. Bin Hamid says his militia came under sustained attack while helping defend a second American compound on Sept. 11, but now with no aid, Benghazi is being transformed into a ghost town, he tells the paper.

â€œMaybe they are afraid,â€ bin Hamid adds, offering a possible explanation for why the United States has ceased any on-the-ground investigation.

Afraid may be an understatement, however, especially since the US has failed to act quickly in investigating the incident. On Monday, the Post reported that the main compound used by American diplomats in Benghazi was unguarded and heavily looted, and The Atlantic Wire reports that â€œthe FBI has still not been able to visit the compound, set up any operations in the city or even interview any witnesses who were present during the terrorist attack.â€

Now, says the US Department of State, all â€œdiplomatic outreachâ€ missions affecting the Libyan people will be done outside Benghazi and in the countryâ€™s capital of Tripoli, where whatever American officials that remain will work remotely.

On Tuesday, Secretary of State Hillary Clinton was sent a letter from the House of Representativesâ€™ Committee on Oversight and Government Reform demanding an explanation for why Ambassador Stevens and others were not properly protected, despite a slew of warnings identified by the State Department in the weeks and months before (.pdf).

Citing an investigation the committee conducted on their own involving interviews with whistleblowers close to the incident, the letter suggests â€œthe attack that claimed the Ambassadorâ€™s life was the latest in a long line of attacks on Western diplomats and officials in Libya in the months leading up to September 11, 2012.â€

â€œIt was clearly never, as Administration officials once insisted, the result of a popular protest,â€ the letter continues, condemning the White Houseâ€™s original excuse that the assault was likely a response to the now-notorious â€œInnocence of Muslimsâ€ film. â€œIn addition, multiple US federal government officials have confirmed to the Committee that, prior to the September 11 attack, the US mission in Libya made repeated requests for increased security in Benghazi. The mission in Libya, however, was denied these resources by officials in Washington.â€

The committee letter continues with a list of one dozen incidents in the months ahead that exposed anti-American tendencies among Libyan insurgents, including the fact that a June 2012 pro-Gadaffi Facebook page targeted Ambassador Steven and published his daily jogging route. Whistleblowers speaking to the committee were aware of this event and others, which the group says, shows â€œa clear pattern of security threats that could only be reasonably interpreted to justify increased security for US personnel and facilities in Benghazi.â€

With this weekâ€™s withdrawal, however, what remains of Americaâ€™s attempts to bring democracy overseas is but an abandoned city of death and destruction â€” which the House Committee insists could have been prevented. (RT News)