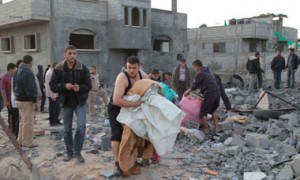 The Israeli ambassador to Washington, Michael Oren, says the US has given his government a free hand in its assault on Gaza as the Israeli cabinet ordered a large call up of military reserves, prompting fears of a ground invasion.

The Palestinian delegation to Washington condemned the US response to the crisis as “biased and weak”, and called on the White House to stop Israel using American-made weapons against civilians. It also described as “shameful” what it called the justification of the murder of Palestinians by countries supporting Israeli actions, including Britain.

Hillary Clinton, the US secretary of state, called the Israeli and Egyptian foreign ministers, Avigdor Lieberman and Mohamed Kamel Amr, on Friday to urge a de-escalation of a “very, very dangerous situation” in Gaza, according the State Department.

Oren spoke during a visit to Capitol Hill on Friday after both houses of Congress overwhelmingly voted for resolutions in support of Israel’s “inherent right to act in self-defence”.

“The United States has given us the full backing to take whatever measures are necessary to defend our citizens from Hamas terror,” he said. “Israel has received unequivocal and outstanding support from the United States and all branches of government. From the White House, from Congress, in both parties, completely bipartisan support.” Among the few voices of criticism raised was from congressman Keith Ellison, who said he visited Gaza after the last major Israeli attack four years ago.

“It’s a devastated area already. It’s only going to be made worse by this. Innocent people are dying. We need a ceasefire,” he said.

The Israeli ambassador has been leading a PR drive in Washington to cast Israel as the innocent victim of indiscriminate terror attacks, a claim strongly challenged by Palestinians who accuse Binyamin Netanyahu, the Israeli prime minister, of engineering the conflict as a political strategy in the run-up to January’s general election.

Oren has likened the situation to 1948, during Israel’s war to establish its independence, and 1967, when a strike against Arab armies resulted in a swift victory that led to the occupation of Gaza, the West Bank and East Jerusalem. He said Hamas has been “emboldened” by the Arab spring and that it is being armed with weapons from Libya, Sudan and groups in the Sinai.

Oren called the news that a rocket fired from Gaza landed within a few miles of Jerusalem an “escalation” in the crisis.

“We are prepared to take any and all measures to defend our citizens, including measures in the air and on the ground … Israeli ground forces have been moved to the border. There has been no crossing of the border to date, but those forces are deployed and ready to act, be there a need,” he said.

That position was unequivocally backed by the congressional resolutions without the call made by the Obama administration for Israel to show restraint and avoid civilian casualties.

The two houses of Congress expressed “unwavering commitment to the security of the state of Israel as a Jewish and democratic state with secure borders, and recognises and strongly supports its inherent right to act in self-defence to protect its citizens against acts of terrorism”.

The influential pro-Israel lobby group, the American Israel Public Affairs Committee (Aipac) said the resolutions “demonstrate that America continues to firmly stand with Israel and her right to defend herself”.

The Palestinian delegation to the US accused Washington of taking Israel’s side.

“The United States response is at best biased and weak because it completely ignored the fact that Israel started the escalation. The US has a moral obligation to ask Israel not to deploy its US-made weapons to kill and injure civilians. The US is also expected to tell Israel that there is no military solution to the conflict. The only way to achieve peace is to uproot the cause of its absence: Israel’s military occupation of Palestine,” it said. “It is shameful that certain countries are justifying the murder of Palestinian civilians. It is time for all to understand that Palestinian lives are as precious as any others in the region and around the world. The political complicity must end and Israel must be held accountable.”

Part of Oren’s push has been to win US public support with numerous television and radio interviews in which he has said that Israelis cowering from rockets fired from Gaza is equivalent to 40 million Americans having to hide in bunkers. Israeli diplomats have also compared Hamas rocket attacks from Gaza to Miami being shelled from Cuba. Critics pointed out that Cuba is not occupied by the US.

Oren also pushed a frequently heard line that civilian casualties during Israeli attacks are the fault of Hamas, which uses them for PR purposes.

Palestinian officials have noted that Israel maintains its military headquarters in the heart of Tel Aviv. (The Guardian).