A small fleet of US military aircraft have arrived in the southern Japanese island of Okinawa, amid protests by local residents who claim they are unsafe.

Six MV-22 Osprey flew from Iwakuni base on Japan’s mainland, where they have been waiting for deployment since arriving from the US in July to the Futenma marine corps base. 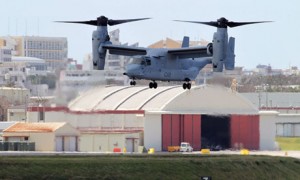 Their delayed arrival in Okinawa, which hosts more than half of the 47,000 US troops in Japan, came after Tokyo said it was satisfied by Washington’s assurances over the aircraft’s safety record.

The transport aircraft’s tilt rotors allow it to take off and land like a helicopter and cruise like a plane. The US says the fleet at Futenma is needed to replace ageing CH-46 aircraft and improve its ability to respond to security crises in the Asia-Pacific region.

Local campaigners insist the Ospreys pose a risk at Futenma, a sprawling marine corps base located in the densely populated city of Ginowan. Anti-base groups said crashes involving the aircraft in Morocco and Florida this year proved they were unsafe to fly in built-up areas.

Local TV showed hundreds of protesters near Futenma’s perimeter fence chanting and displaying banners opposing the deployment. On Sunday night, police forcibly removed residents and activists who had staged a sit-in in front of the base’s main gate.

The governor of Okinawa prefecture, Hirokazu Nakaima, said he could not understand why the Ospreys had arrived before local safety concerns had been addressed. “It’s extremely disappointing and regrettable,” he said.

Okinawa residents, many of whom want the Futenma base moved off the island altogether, believe it is only a matter of time before one of the aircraft crashes in a populated area. A university near the base was the scene of a crash involving a CH-53 helicopter in 2004; in 1959 a US fighter jet plowed into an elementary school in central Okinawa, killing 17 people, including 11 children.

Japan’s prime minister, Yoshihiko Noda, said the aircraft was safe, and asked for Okinawa residents to recognise its role in safeguarding national security.

But he added: “We will work hard to share across the country the burden borne by Okinawa by taking steps towards transferring Osprey training to [Japan’s] main island,” he told reporters.