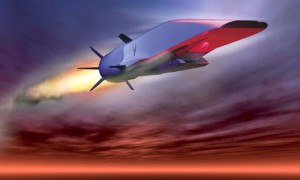 An unmanned experimental aircraft failed during an attempt to fly at six times the speed of sound in the latest setback for hypersonic flight.

The X-51A Waverider was designed to reach Mach 6, or 3,600mph, after being dropped by a B-52 bomber off the southern California coast on Tuesday.

Engineers hoped it would sustain its top speed for five minutes, twice as long as an X-51A has gone before. But the air force said Wednesday that a faulty control fin prevented it from starting its exotic scramjet engine and it was lost.

“It is unfortunate that a problem with this subsystem caused a termination before we could light the scramjet engine,” Charlie Brink of the Air Force Research Laboratory at the Wright-Patterson Air Force Base in Ohio, said in a statement.

“All our data showed we had created the right conditions for engine ignition and we were very hopeful to meet our test objectives,” Brink said.

The Pentagon has been testing hypersonic technologies in hopes of delivering strikes around the globe within minutes.

It was the latest failure for the Waverider programme. A test flight last year ended prematurely with an X-15A trying to restart its engine until it plunged into the Pacific Ocean.

During the first flight of an X-51A in 2010, it reached near five times the speed of sound for three minutes.

There’s only one X-51A vehicle left. The air force has not decided whether it will fly. (The Guardian)