The Obama administration is preparing new sanctions on Syrian president Bashar al-Assad’s regime and its allies.

US secretary of state Hillary Clinton heads to Turkey for weekend talks with top Turkish officials and Syrian opposition activists, and senior officials travelling with her said fresh sanctions aimed at hastening the downfall of the Assad regime were imminent. 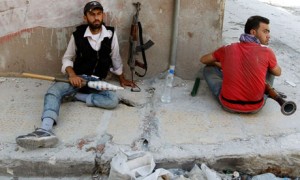 The sanctions are expected to complement existing penalties, which have targeted Assad’s inner circle, including his entire cabinet, along with Iranian individuals and entities that have been providing support to the regime.

They come as Clinton prepares for Saturday’s discussions in Istanbul that will focus on forming a “common operational picture” with the Turks and Syrians to guide a democratic transition in post-Assad Syria, the officials said.

Clinton will also boost humanitarian relief to tens of thousands of Syrians fleeing the country, they said. In Istanbul, Clinton is also expected to announce an additional $5.5m in US humanitarian aid. The new assistance will bring the total US aid to $82m since the crisis began 17 months ago.

Coordinating support for the Syrian opposition will be a key agenda item, the officials said, adding that Clinton was keen to understand the Turkish position as conditions inside Syria deteriorate with rebel forces gaining strength and effectiveness.

The United States and its western allies are stopping short of providing lethal assistance to the opposition, but it has become an open secret that several Arab countries are supplying weapons and ammunition.

The officials said Clinton would take what she learns in Istanbul from the Turks and the Syrian activists she meets and begin to discuss points of agreement with European foreign ministers in the coming days in preparation for a new Friends of Syria meeting to be held in at an as-yet unscheduled date in late August or early September.

In Syria, government forces were fighting rebels outside Damascus and in the northern city of Aleppo as civilians continued to flee into Turkey to escape the civil war.

The government of Britain said Friday it was offering the rebels nearly $8m in assistance to pay for communications equipment and medical supplies.

Meanwhile, in New York diplomats at the United Nations were looking for someone to replace Kofi Annan, a former UN chief, who has abandoned his effort to find a peace agreement in Syria and is leaving by the end of the month. (The Guardian)