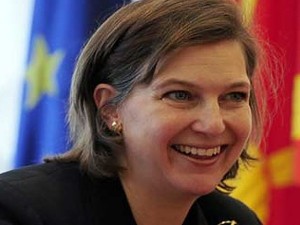 The United States has warned that international action maybe initiated on Sri Lanka if the island fails to implement the latest resolution adopted at the UN Human Rights Council.

US State Department spokeswoman Victoria Nuland said Sri Lanka should listen to the words of the international community and implement the plan that they have never implemented.

She was referring to the recommendations of the Lessons Learned and Reconciliation Commission (LLRC) which the US sponsored resolution calls for the full implementation.

â€œAs you know, we welcome the passage of this new resolution; 24 other countries also voted for it. We call on the Government of Sri Lanka to fulfill its obligations to its own people. The resolution very clearly expresses the support of the international community for Sri Lanka, addressing its outstanding issues related to reconciliation and for meeting its obligations for accountability, which it has not yet done,â€ she said at a State Department press briefing.

She said that the US had made clear, including when senior Sri Lankans had visited Washington, that if they didnâ€™t take steps that they could then they would see this kind of a resolution coming forward.

â€œAgain, we want to see the Sri Lankans take their own decisions. As weâ€™ve said before, if those are not forthcoming, the international community will look at whether there are other steps we can take,â€ she said.

Asked what those â€œotherâ€ steps are and if it means another resolution next year, Nuland said â€œWe have talked in the past about whether there ought to be an international effort on this front rather than a Sri Lankan-led effort.â€

Earlier the White House had said the United States wants the Sri Lankan government to develop a comprehensive action plan for implementing steps on reconciliation and accountability, as called for in the resolution, and to work with UN experts and its partners in the international community to take meaningful action to achieve these important goals, which will be a critical part of Sri Lankaâ€™s efforts to provide a bright, peaceful, and stable future for all of its people.

â€œWe stand ready to partner with Sri Lanka in this important effort,â€ the statement added.