The United States has sent military troops to the Jordan-Syria border to help bolster Jordan’s military capabilities in the event that the violence in Syria spreads, according to defence secretary Leon Panetta.

Speaking at a Nato conference of defense ministers in Brussels, Panetta said the US has been working with Jordan to monitor chemical and biological weapons sites in Syria and also to help Jordan deal with refugees moving across the border. 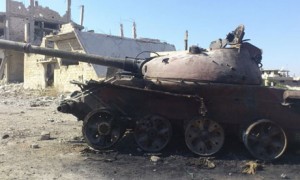 However, the revelation of US military personnel being deployed so close to the Syrian conflict suggests an escalation in the US military involvement, even as Washington pushes back on any suggestion of a direct intervention in Syria.

It also follows several days of shelling between Turkey and Syria, an indication that the civil war could spill across Syria’s borders and become a regional conflict.

“We have a group of our forces there working to help build a headquarters there, and to ensure that we make the relationship between the United States and Jordan a strong one so we can deal with all the possible consequences of what’s happening in Syria,” Panetta said.

The development comes with the US presidential election less than a month away, and at a time when Mitt Romney, the Republican nominee, has been criticizing Barack Obama’s foreign policy, accusing the administration of embracing too passive a stance in the Middle East.

The defense secretary and other White House officials have expressed concern about Syrian president Bashar al-Assad‘s arsenal of chemical weapons. Panetta said last week that the United States believes that while the weapons are still secure, intelligence suggests the regime might have moved the weapons to protect them. The Obama administration has said that Assad’s use of chemical weapons would be a “red line” that would change the US policy of providing only non-lethal aid to the rebels seeking to topple him.

Pentagon press secretary George Little, traveling with Panetta, said the US and Jordan agreed that “increased cooperation and more detailed planning are necessary in order to respond to the severe consequences of the Assad regime’s brutality.”

He said the US has provided medical kits, water tanks, and other forms of humanitarian aid to help Jordanians assist Syrian refugees fleeing into their country.

Little said the military personnel were there to help Jordan with the flood of Syrian refugees over its borders and the security of Syria’s stockpiles of chemical and biological weapons.

“As we’ve said before, we have been planning for various contingencies, both unilaterally and with our regional partners,” Little said in a written statement. “There are various scenarios in which the Assad regime’s reprehensible actions could affect our partners in the region. For this reason and many others, we are always working on our contingency planning, for which we consult with our friends.”

A US defense official in Washington said the forces are made up of 100 military planners and other personnel who stayed on in Jordan after attending an annual exercise in May, and several dozen more have flown in since, operating from a joint US-Jordanian military center north of Amman that Americans have used for years.

He spoke on condition of anonymity because he was not authorized to talk about the mission on the record.

In Jordan, the biggest problem for now seems to be the strain put on the country’s meager resources by the estimated 200,000 Syrian refugees who have flooded across the border â€“ the largest fleeing to any country.

Several dozen refugees in Jordan rioted in their desert border camp of Zaatari early this month, destroying tents and medicine and leaving scores of refugee families out in the night cold.

Jordanian men also are moving the other way across the border â€“ joining what intelligence officials have estimated to be around 2,000 foreigners fighting alongside Syrian rebels trying to topple Assad. A Jordanian border guard was wounded after armed men â€“ believed trying to go fight â€“ exchanged gunfire at the northern frontier.

Turkey has reinforced its border with artillery guns and deployed more fighter jets to an air base close to the border region after an errant Syrian mortar shell killed five people in a Turkish border town last week and Turkey retaliated with artillery strikes.

Turkey’s military chief Necdet Ozel vowed Wednesday to respond with more force to any further shelling from Syria, keeping up the pressure on its southern neighbor a day after Nato said it stood ready to defend Turkey.(The Guardian).