<![CDATA[The United StatesÂ  has made plans to create a missile defense shield in Asia, and is reportedly in talks with Japan about its implementation. Experts warn such a measure may anger China. <!--RTEditor:genereated--> 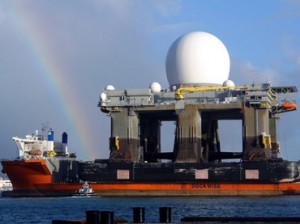 According to the Wall Street Journal, the most prominent development would be the installation of a powerful early-warning radar, â€˜X-bandâ€™, described by its manufacturer, Raytheon Co, as â€œa large, phased-array fire control sensor, featuring precision discrimination and interceptor support,â€ designed to counter threats from â€œrogue states.â€ It would be installed on an unnamed southern Japanese island. WSJ has quoted Steven Hildreth, a missile-defense expert with the Congressional Research Service, as saying the U.S. was “laying the foundations” for a region-wide missile defense system that would be constituted by US ballistic missile defenses and those of regional powers, particularly Japan, South Korea and Australia. Although supposedly aimed at containing threats from North Korea, Hildreth also told WSJ “the reality is that we’re also looking longer term at the elephant in the room, which is China.” The WSJ goes on to say that the X-band arc would allow the US to â€˜peer deeperâ€™ into China, as well as North Korea. Chinaâ€™s power in the Taiwan Strait has been cited as a cause for concern by the US.WSJ reports that China has between 1,000 and 1,200 short range ballistic missiles aimed at Taiwan. Last month, it was widely rumored that Beijing tested a new intercontinental ballistic missile, which had long enough range to strike any city in the United States.Adding to fears is speculation surrounding the so called â€˜carrier-killerâ€™, an anti-ship missile that could strike the US Pacific fleet. Despite U.S concerns they may be targeted by a bolstered China, there has been little news or confirmation from Beijing that these alleged weapons exist. Philippines based political activist and head of the New Patriotic Alliance, Renato Reyes, told RT that they feel the â€œuse of North Korea and the use of China as the usual scapegoats is only intended to provide more justification for the permanent and expanded US military presence in our region.â€ PressTV reports that the shield could cover â€œlarge swaths of Asia,â€ including countries as far and wide as the Philippines. Reyes stressed, if you look â€œbeyond the rhetoric â€¦the US wants to justify rebalancing most of its troops towards the Asian regionâ€. He told RT that he doubted â€œif China is really intent on projecting its military power outside its own borders or if China poses a military threat to any country in the region.â€ Rather, the spread of missile defenses was regarded by him as â€œintended to provide more justification for the permanent and expanded US military presence in our region including countries like the Philippines which will soon be host to more US troops and more US war machines.â€ If the Philippines were to host elements of the shield, it would put the country â€˜directly in the crosshairsâ€™ of any potential confrontation, and would drag it into the dealings US military in the region. The Philippines have already played host to US interests in the region, and Reyes points out that this recent announcement was â€œquite a revelation,â€ as they were initially under the impression that it was only going to be a land-based radar that was set up, â€œpurportedly for maritime surveillance and nobody was talking about a missile defense system.â€ WSJ reports that the number of US Navy warships capable of using this technology will have increased from 26 to 36 by 2018, with up to 60 per cent of them are likely to be stationed in the Asia Pacific region.Additionally, the US Army is planning to finish building six Terminal High Altitude Area Defense (THAAD) antimissile systems. (RT News)]]>