<![CDATA[ <div> Stopping attacks by members of various branches of the Afghan security forces on Nato troops has become a priority for Nato commanders, with one in seven of all coalition deaths this year coming at the hands of Afghan colleagues. Poor vetting of police and soldiers has been partly blamed for the attacks, which have killed 45 and wounded at least 71 in 2012 alone. 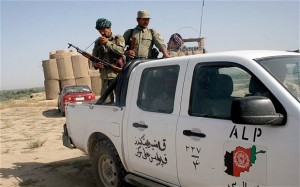 All 16,300 Afghan Local Police members will be re-examined for possible links to the insurgency, and about 1,000 new recruits will have their training put on hold.
Those already trained will continue operations while they are screened, commanders said. The suspension will not affect the nearly 350,000-strong national police and army whose members have been responsible for the majority of â€œgreen and blueâ€ incidents.
An American military statement said: â€œCurrent partnered operations have and will continue, even as we temporarily suspend training of about 1,000 new ALP recruits while re-vetting current members.â€
ALP members, who are recruited to protect their villages from insurgents, attacked coalition forces at least twice in August, killing six United States marines in Helmand province. The ALP programme is seen by many Nato generals as a powerful weapon against the insurgents, and it is frequently touted as â€œthe Talibanâ€™s worst nightmareâ€. Proponents argue that the ALPâ€™s knowledge of local people and terrain makes them formidable against a Taliban enemy that foreign soldiers find indistinguishable from the local population. However the rush to increase numbers has meant existing background checks have not been strictly enforced. The screening will include drugs tests, background checks by the Afghan intelligence service and screening against a biometric database of known insurgents. Each member must also be vouched for by a local elder. Such vetting would only have a limited effect on screening out potential assassins, said Anthony Cordesman of the Centre for Strategic and International Studies. He said: â€œBetter vetting may help, but there are few records, much depends on tribal and local leaders who care more about their power base, infiltrators can be better trained and given better covers, and vetting does not affect people who become hostile after they enter the force.â€ The ALP programme has spread to 75 Afghan districts, with American special forces soldiers living and working alongside members to train them. It is viewed with suspicion by many Afghans though, who fear the forces will become predatory, ungovernable militia such as those which plagued the country during the 1990s civil war. ALP groups are credited with greatly improving security in some districts, but some groups have also been accused of extortion, kidnap and rape. (The Telegraph).
]]>