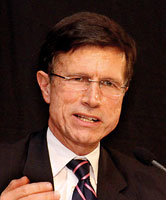 â€œRajapaksa emphasized to Blake his personal commitment to developing relations with the United States, pointing to the strong personal connections between the United States and his countryâ€™s leadership. (Note: Rajapaksa himself is a U.S. citizen. End Note.) Blake said the U.S. shares this desire, but we need to see progress on the issues discussed. Evidence of freedom of movement, for example, would go a long way toward that end.â€ the US State Department informed US Embassy Colombo.

A classified diplomatic cable which details a meeting the US Assistant Secretary for South and Central Asian Affairs Robert Blake has had withÂ  Secretary to the Ministry of Difence Gotabhaya Rajapaksa on September 24, 2009 in US. The cable was classified as â€œConfidentialâ€ signed by Hillary Clinton on September 25 2009.

Related stories to this cable;

Read the cable below for further details;