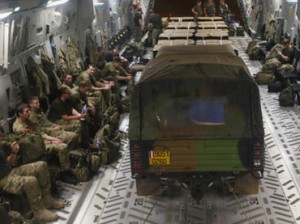 Washington has agreed to provide France with airlifts to help move troops and equipment in the country’s operation in Mali, an official told Reuters. Meanwhile, a group of US military trainers are expected to arrive in the region by the weekend. ­The decision to boost Washington’s contribution to the French-led military operation against Islamist rebels in Mali comes after a formal review of the French request by the Obama administration. In addition to reports that Washington will help French and Malian forces by way of airlift support for getting troops and equipment to the battlefield, CBS News correspondent Margaret Brennan reported that Secretary of State Hillary Clinton said that US military trainers “will be on the ground by this weekend.” Earlier, the US Defense Secretary claimed that the United States would only aid the combat mission with logistical support and intelligence-gathering assistance – and that no American troops will be put on the ground. The trainers are not expected to land in Mali itself, and will most likely train troops in neighboring African countries included in the UN-authorized ECOWAS intervention force. At the moment France has 1,400 troops of the ground in Mali, with 1,100 more – including French Foreign Legionnaires – expected to be deployed over the next few days. (RT News).]]>