<![CDATA[The Jaffna based ‘ Uthayan newspaper has come under undue pressure once more, according to reports when a youth who was distributing the papers was beaten by four unidentified Sri Lankan paramilitary persons on Thursday (10), reports say. <a href="http://www.eelamenews.com/?attachment_id=108177" rel="attachment wp-att-108177"> 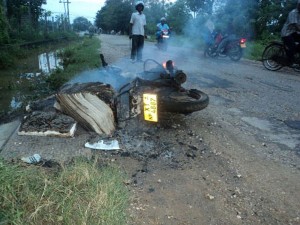 They had set his bicycle and stack of papers on fire. The incident took place close to Neliaddy town on the Jaffna- Pointy Pedro road, the name of the youth who was wast hus attacked is Piriven, who also had afracture a fracture when he tried to defelct a blow for his clients. The boy was thus stacked was undergoing treatment at the Point Pedro hospital Wednesday (09) also in the Velevettitura iarea, a boy who was engaged in distributing Uthyan newspaper was followed by an outside group who thereafter reoorted the matter to the Vellvettiturai.]]>