CWVHR noted that the majority Tamil Northern province of Sri Lanka was under intense militarization. According to MRG, in the Jaffna peninsula, there are some 40,000 army personnel, a ratio of approximately 1:11 of military personnel to civilians. 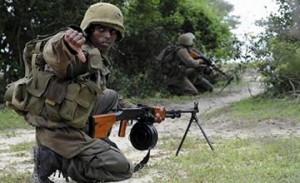 The situation in Vanni is much worse with the ratio reportedly being 1:3. The military has been given key civilian administrative positions, including the Governors of the Northern and Eastern Provinces