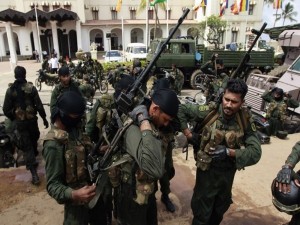 A Sri Lankan soldier was killed and 18 others were injured following an accident in Chetikkulam this morning.

The Lankan police said that the soldiers were travelling in a truck when the accident took place.

The truck had lost control and overturned killing the soldier and injuring the others.

According to the police, the soldiers are attached to the Chetikkulam military camp.

The injured soldiers were admitted to hospital.