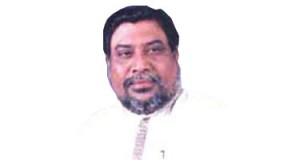 The residents in the affluent Sarvodaya Enclave in New Delhi have on 8 August filed a petition at the New Delhi High Court, asking for the removal of former Chief Minister of Sri Lankaâ€™s North-Eastern Provincial Council, Annamalai Varatharajaperumal and his 25 men-strong security contingent from the enclave, as they have become a nuisance, interrupting the day-to-day lives of the residents.

The residents in their Petition have said the presence of Varatharajaperumal at the D-block in the enclave has created inconveniences for the residents, as his 25 security personnel have put up their camps at the park of the enclave, which is used by the residents for recreational purposes.

Vikas Padora, the Attorney-at-Law appearing on behalf of the Petitioners, stated that Perumalâ€™s security personnel have set up barracks in the Sarvodaya Enclave, because of Perumalâ€™s presence in the area, thereby causing inconvenience to the residents.

â€œTheir attitude towards the residents in the enclave is harsh. Therefore, remove the encroachment of the Varatharajaperumalâ€™s security men into the park at the enclave,â€ they have requested. The Petitioners have also urged the New Delhi High Court to relocate Varatharajaperumal and his security personnel to another location.

Following the Petition by the residents, Judges of the New Delhi High Court, A.K. Sikri and Rajiv Sahai requested the Ministry of Home Affairs to respond to the Petition and to give proper consideration to their request.

Varatharajaperumal was a former lecturer in economics at the University of Jaffna. He joined the Eelam Peopleâ€™s Revolutionary Liberation Front (EPRLF) in the early 1980s and became the first Chief Minister of the North-Eastern Province, when his leader N. Pathmanabha accepted the Provincial Council System, which was introduced with the signing of the Indo-Lanka Accord in 1987.Varatharajaperumal remained the Chief Minister of the North-Eastern Province from 1988 to 1990.