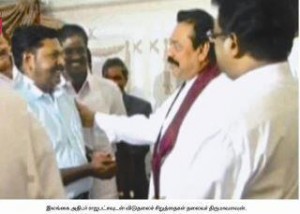 Tamil Nadu party Viduthalai Chiruthaigal Katchi has registered its protest against the proposed visit by Sri Lankan President Mahinda Rajapaksa to India. Thol Thirimavalavan, the leader of VCK, a constituent of United Progressive Alliance, has told the media that the Sri Lankan President should not be allowed into the country, as he had allegedly committed genocide against Sri Lankan Tamils. â€œI will be meeting the Prime Minister or Minister of External Affairs in this connection, in a couple of days,â€ Express News Service has quoted him as having said. Asked about the stand of the Centre that Sri Lanka is a friendly nation, he said, claiming that Sri Lanka is friendly itself is an insult. â€œThe island nation is having cordial relations with China and Pakistan. However, Indiaâ€™s friendly gesture towards Sri Lanka remains unreciprocated,â€ he added. To a question on whether he would make a collective representation with the Prime Minister in company of other Parliamentarians from Tamil Nadu, Thirumavalavan replied that no decision has been taken in this regard. Answering another question on a section of Sri Lankan Tamil refugees fleeing from India, he urged the Government to improve the facilities for the refugees in the country and provide identity cards for them. Mr. Rajapaksa is to visit India later this month, primarily to lay the foundation stone of a Centre for Buddhist Studies in Madhya Pradeshâ€™s Sanchi.]]>