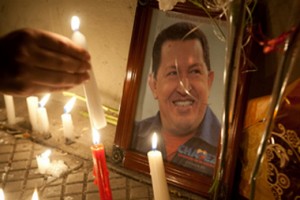 Venezuela has declared seven days of mourning for Chavez the leader who died of cancer.  Its Foreign Minister Elias Jose Jaua Milano said Chavez’s body would be transferred from hospital to a military academy today.

The body of Venezuelan President Hugo Chavez will lie in state through Friday when a public funeral will be held with invited guests from across Latin America. According to Mr Jaua the official funeral would take place with heads of states on Friday, at 10:00 local time (14:30 GMT).

He also called on Chavez supporters to wear clothes in the three colours of the Venezuelan flag to honour the leader.

Latin American leaders have begun arriving in Caracas to pay their respects.  Among them are President Cristina Fernandez de Kirchner of Argentina, Jose Mujica of Uruguay and Evo Morales of Bolivia.

Ecuador declared three days of official mourning, while Iranian President Mahmoud Ahmadinejad, announced a day of mourning, describing him as a “martyr”.

Vice-President Nicolas Maduro will act for the President until an election is held within 30 days. Maduro mentioned a plot against Venezuela, saying he had no doubt that Chavez’s cancer, first diagnosed in 2011, had been induced by foul play by Venezuela’s enemies. The US promptly rejected the accusation.